← How to Look Good While Running: Run a Night Race
Making It to the Sweaty Sixteen →

Marathon Virgin: Going All the Way for the Very First Time

I always wanted my first time to be special. I kept holding out waiting for that special one. I would know it when I saw it. It would be appealing and fun, and I’d have no second thoughts. But after years of putting it off, it was finally peer pressure that made me do it:

I signed up for my very first full marathon.

Until that point, I’d just been a running tease – going halfway but stopping there. Of course, I’d had to work up to that. I used to think my 2-miles races in high school cross country was going far. Two whole miles!

It could always be worse…

Until my cross country coach convinced a bunch of us to run a half marathon at the end of the season. 13.1 miles was SO FAR. That’s like FOREVER. I ran it, thought I was going to die, and held out another whole year before trying again. It hurt!

But then I got older and learned to run on my own terms in college. The more I got used to long training runs, the less of a big deal it all seemed. But it’s more fun with other people, so I got back into half marathon races by doing Hospital Hill and the Gobbler Grind. My two big races every year.

I’d practice, get all geared and psyched up, then just go for it. It was long and rough, but I enjoyed it. I had endurance to last. And I loved basking in the afterglow of endorphins and free beer. Plus the bragging rights and shirts.

This past spring, I started getting around more by signing up for not two but SIX half marathons. And not spread throughout the year but all within 2 months and 1 week of each other. It was a challenge – balancing all those races. But there were PRs to chase and cool medals to get and free beer to be drunk, so I did it. And I enjoyed exploring new races, meeting new people. 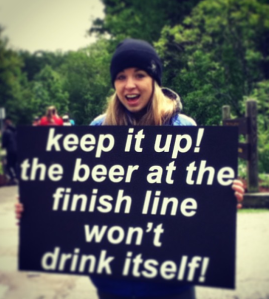 And as I was getting ready to become a half marathon master in February, my best friend Jen announced on Facebook, “Signed up for my first marathon! So nervous!” She had made the long-term commitment to run her first full marathon – The Portland Marathon.

Jen and my fiancee Jason have a friendly running competition going. Jason couldn’t let Jen one up him in running. Since she was taking the plunge, so was he, and since he and I started dating through running, now I was too.

Suddenly, I was no longer holding out for that special race and getting to choose through free will. It was a prearranged marathon marriage, and I was going through with it like it or not.

But, we figured, we were running six half marathons in the spring, the last on June 1st. The full marathon isn’t until Oct 6th. So we’d be starting marathon training already halfway there.  We’d take it easy in June to recover then rev up the running right starting in July.

Also the race newsletters started pouring into our mailbox. Suddenly it wasn’t just a shirt and medal and free Bud Light. It was TWO FINISHER shirts plus the RACE SHIRT plus a MEDAL plus a smaller CHARM VERSION OF THAT MEDAL plus a ROSE plus plus plus….and all the cool entertainment on the course like the traditional awesome accordion duo and local rock bands.

And we get to stay a week up in Portland visiting Jen and her husband Jon.

It is going to be AWESOME!!!

And then training started happening which started trying to take over my life, and my life fought back, and next thing I knew it was eat, sleep, run, stress, ahhhh! 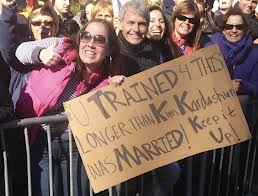 I am in it for long haul.

Training for this marathon has been getting crazy – balance running with a full-time job, a freelance job, cross training, racquetball, cooking, cleaning, eating, sleeping (??? Sleep? Ha!). Oh wait, we’re also getting married in November! So add planning a wedding on top of that.

When my training runs became half marathon distance and further, I started questioning the whole endeavor. Run 13 miles but without the inspiration of hundreds of other runners around me? Run 14 miles without funny spectator signs to read? Run 16 miles without aid stations – instead carry everything on me making me feel like a pack horse?

And where’s the rewards? The finisher medal? The cool shirt? The free beer? But the real drag is the lack of recovery reward – the coveted Post-Half Marathon Nap .

Not anymore. Sometimes we have to do the runs at night after work. So we get home, go run, and get back around 9pm. Then eat. Then off to bed. Then up the next day for work. Then back to training. And not an easy 3-miler but today is a 7-miler. Even with a day off before getting back to training, my legs are wondering what in the world is going on.

I want to do this race. I’ve always had run a marathon on my bucket list. As a runner, it’s a huge milestone accomplishment.

But it’s a not something to be taken lightly. It’s one of those things that sounds easy in your head, like “Hey, I’m going to write a book” or “I could have hit that home run.”

But when it comes down to doing all the work leading up to that big event, it’s tough. Even if you decided to walk a marathon, it’s not something you do for shits and giggles. There’s a lot of preparation and dedication – not to mention all the new running gear you end up buying.

The same math applies to cans of Mountain Dew.

All I used to run with were some Kleenexes (Welcome to the Midwest! Here’s some allergies!!!), my house key, and maybe an energy goo for on a really long run (which was 10 miles back in the half marathon days).

I don’t regret my decision, and I’m trying to stay positive about it. IT WILL BE FUN. WE WILL BE FINE. I WILL FINISH EVEN IF AFTERWARDS I ADD KNEE SURGERY TO MY WEDDING REGISTRY. But I feel like there’s a lot to a full marathon runners need to know before jumping into one.

It’s not just more training – it’s A LOT of training that takes A LOT of time. It makes you really tired and hungry. All you want to do is eat and sleep and sleep some more. And then eat. I actually met a runner who admitted to gaining weight while training for a marathon because she was so hungry ALL THE TIME. So you have take into account that it’s like having another job, and you need to plan to have enough food on hand to sustain fueling your body and aiding in recovery. 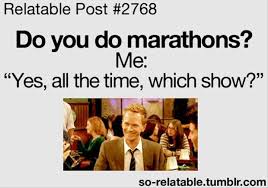 And you need to plan out recovery days. And by recovery I don’t just mean don’t run that day. RELAX. Read a book. Don’t plan to do anything that night but chill. Enjoy some time with the foam roller or massage stick (the one with the giant plastic beads is AWESOME!). Maybe even have a beer (carb loading!).

Don’t forget you need stuff to survive. During the race you will have access to water, Gatorade, food, etc. But what if your body glide wears off? Do you want music or can you converse with yourself for four-plus hours? And unless you have a running group who puts aid stations on your long runs, you need to have all that stuff on you when you train.

And what works to run in for less than two hours might start to chafe or not wick sweat away fast enough to be comfortable for marathon runs. And you’re going to need new shoes halfway through training! All of a sudden running hats make a lot of sense to keep the sweat out of your eyes for three hours.

But the race is going to be worth it! Marathons wouldn’t be one of the fastest growing and most popular sporting events if they weren’t! There’s a chance though it’s going to hurt – a lot. But by being prepared and going in with the right mindset, it will hurt a lot less! (See! I’m being positive!)

I’m not trying to scare anyone off – I just want to be honest that there’s a lot more to running a marathon than I initially thought and it’s not always as glamorous as it looks in glossy running magazines.

Like all first times, I am nervous, excited, scared, thrilled, and know there’s no sure way to anticipate or understand how it’s going to feel or what it’s going to be like. But I’ve survived running this long in life and can’t keep hiding in my 13.1-mile long comfort zone.

It’s time to go all the way. 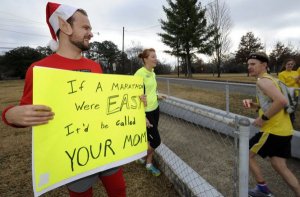 One of the funniest running signs ever: If a Marathon were EASY, it’d be called YOUR MOM.

← How to Look Good While Running: Run a Night Race
Making It to the Sweaty Sixteen →