← Why I Dew What I Do: smart ass answers to life’s ultimate question
12 Days of Running: On the 2nd Day of Running, Horsetooth Half Gave to Me… →

12 Days of Running: On the 1st day of running, the Westport Run Gave to Me…

In honor of the holidays, I am posting special blog posts chronicling 12 of my favorite running races from 2012 and the somewhat funny lessons, or gifts you could say, that came from them (well…they’re funny now; at the time not so much). See, we have 12 races (technically I think I did 13 or 14, but I am English major, so I am allowed to do fuzzy math and with a bit of rounding, we get 12! ah, ah, ah, races.), we also had 12-12-12, and there are 12 days of Christmas. I also have the attention span of a 12-year old, and there are 12 cans of pop in a 12-pack of Mountain Dew. Clearly, this idea of 12 is significant, and we should celebrate it.

On the 1st day of running, the Westport Race gave to me: no admission to an Irish bar.

The Westport Race is usually the weekend before St. Patrick’s Day and starts in Westport at Kelly’s Irish Pub. It’s a wonderfully well-put together race hosted by the KC Track Club and is a strange 4 miles. Not a typical 5K, but 4 miles. The reason for this unusual number probably has something to do with the luck of the Irish.

The biggest attraction though is, of course, the promise of beer afterwards at Kelly’s and the fact that the race starts at a time when most people are actually conscious on a Saturday morning – 10am. I cannot even begin to list the number of races that start in KC at 7am. It drives me crazy because Saturday is supposed to be my one sleep in day of the week, but I usually bribe myself with the promise of a nice beer and nap later.

So, my former roommate Sally, my boyfriend, and I get to Westport early, around 8:45am, and found parking. If you can score parking on race days in Kansas City, then you have already completed half the battle. We still had time to kill though and wandered around Westport for awhile.

It was nice to get there early and not fight the parking battle, but heck, there is nothing to do at a race if you get there too early. My boyfriend decided to step into Kelly’s to use the restroom because a bar bathroom is still WAY better than a port-a-potty. And that’s when the trouble began.

My boyfriend stepped into Kelly’s, and I went to follow him but was stopped by the bouncer:

“I can’t let minors in unaccompanied.”

“What? I’m just trying to follow my boyfriend to the bathroom.”

“I’m sorry, miss. I can’t let minors in without an adult.”

“What? No.” I had two Kleenexes and a patellar knee band. I’m about to run a race.

So, at this point, I just stood by the door pissed and waited for my boyfriend to come out. I was going in with him, why didn’t he qualify as an adult? (ok, I have a lot of smart ass answers to that question, but I will let them pass in the spirit of the holidays)

Also, who the hell tries to sneak in underage and drink a beer at TEN in the MORNING right BEFORE RUNNING for FOUR miles? Who the hell drinks beer right before a race regardless of age? (Ok, ok. That would be anyone doing Brew 2 Brew, but that’s another story, Why Dew I Run? For Beer, Of Course!) Also, how was I gonna score a beer with nothing but two Kleenexes and a patellar band? Maybe if the bartender had a bum knee…

I was also ticked because I know the owner of Kelly’s, Pat Kelly, who plays handball and drinks at the Athletic Club where I used to bartend (yes, there is a gym in Overland Park with a BAR in it; the irony is awesome!) But later when I talked to him, he pointed out it is the law, and the last thing I want to do is compromise a friend’s business and a stellar race sponsor too.

So, kids, the lesson learned is make sure you take your ID with you to any race where you want access to beer or access to bathrooms where there is also beer sold. Or don’t dress like a 16-year-old. At least bring your ID to packet pickup; there is usually a special place on your bib to mark or a bracelet to wear proving you’re over 21 that you can get at pickup, so you don’t need to worry about having your ID on hand for the race. I later realized my age was printed on the number bib and that might have saved me some trouble, but it’s still not an actual ID and wasn’t verified by anyone.

But in thirty years, I will feel incredibly complimented that when I was 24-years-old wearing a very suppressing sports bra with my hair in a ponytail and no makeup on, I could pass for 16. I will miss the days of being carded and wonder why I didn’t compete in the 19 and under age group. 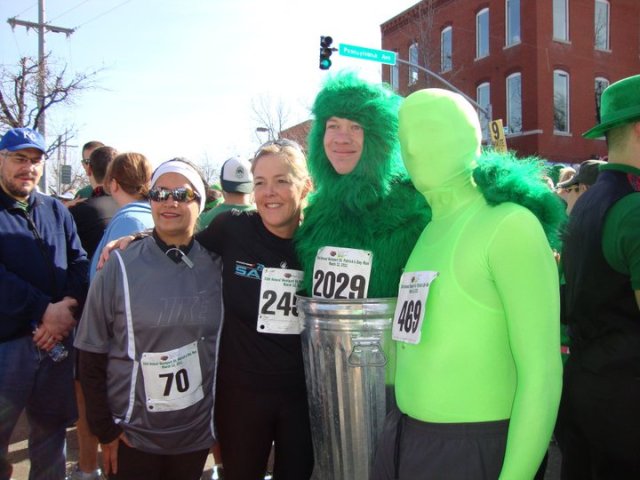 Oscar the Grouch here is my favorite costume for this run in 2011. He taught me if you are getting beat by Oscar the Grouch in a race, you need to step up your training program. Also, it IS possible to run 4 miles in a trash can. You’re awesome, Oscar!

← Why I Dew What I Do: smart ass answers to life’s ultimate question
12 Days of Running: On the 2nd Day of Running, Horsetooth Half Gave to Me… →

I'm Too Stupid to Travel

A travel blog for those of us who get lost, stay lost, and make poor decisions throughout.